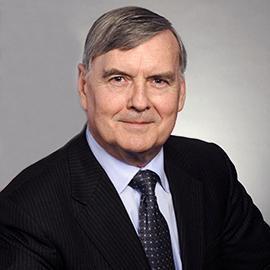 Steve H. Murdock is the Allyn R. and Gladys M. Cline Professor of Sociology at Rice University. He previously served as Director of the U.S. Bureau of the Census having been nominated for the position by President Bush and unanimously confirmed by the U.S. Senate in 2007 and serving until the change in administration in January of 2009. Prior to his appointment at Rice, he was the Lutcher Brown Distinguished Chair in Demography and Organization Studies at the University of Texas at San Antonio (UTSA) and the Director of the Institute for Demographic and Socioeconomic Research.  Before UTSA, Murdock was a Regents Professor and Head of the Department of Rural Sociology at Texas A&M University.  He was also the official State Demographer of Texas.  He was appointed to this position by Governor Rick Perry and was the first person to occupy this position. Dr. Murdock earned his Ph.D. in demography and sociology from the University of Kentucky and is the author or editor of 15 books and more than 150 articles and technical reports on the implications of current and future demographic and socioeconomic change.  He is the recipient of numerous honors and awards. These include the Faculty Distinguished Achievement Award in Research from Texas A&M University, the Excellence in Research Award and the Outstanding Rural Sociologist Award from the Rural Sociological Society, The Distinguished Alumni Award from North Dakota State University and the Distinguished Alumni Award from the Department of Sociology at the University of Kentucky.  He was named one of the fifty most influential Texans by Texas Business in 1997 and as one of the twenty-five most influential persons in Texas by Texas Monthly in 2005.  He is a member of the Phi Beta Kappa, Phi Kappa Phi, and Phi Eta Epsilon national honor societies. 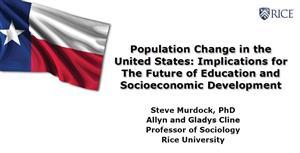